Since its first introduction in 2010, Mizuno’s Shaft Optimizer has become the favoured iron shaft fitting tool of golf professionals worldwide. Measuring five critical dynamics within the swing (Mizuno Swing DNA), the Optimizer is able to recommend an iron shaft best matched to any golfer’s movement. Mizuno measures every shaft in-house to establish a map of EI curves to which it then matches the swing profiles. The new Bluetooth Optimizer enables Mizuno’s club fitters to capture swing data directly to the software, run from an iPad or iPhone.

An overhaul for 2019 has a major hardware upgrade  – with a Gyro added to the Shaft Optimizer’s existing strain gauges, allowing fitters to recommend a more accurate lie angle than the traditional lie board method. The Gyro enables the club’s swing plane to now be measured in 3D space along with shaft dynamics, ignoring face rotation through impact for a more accurate lie angle reading. Using a combination of the Gyro and strain gauges which run throughout the shaft, Mizuno is now able to capture 40 data points from every swing. 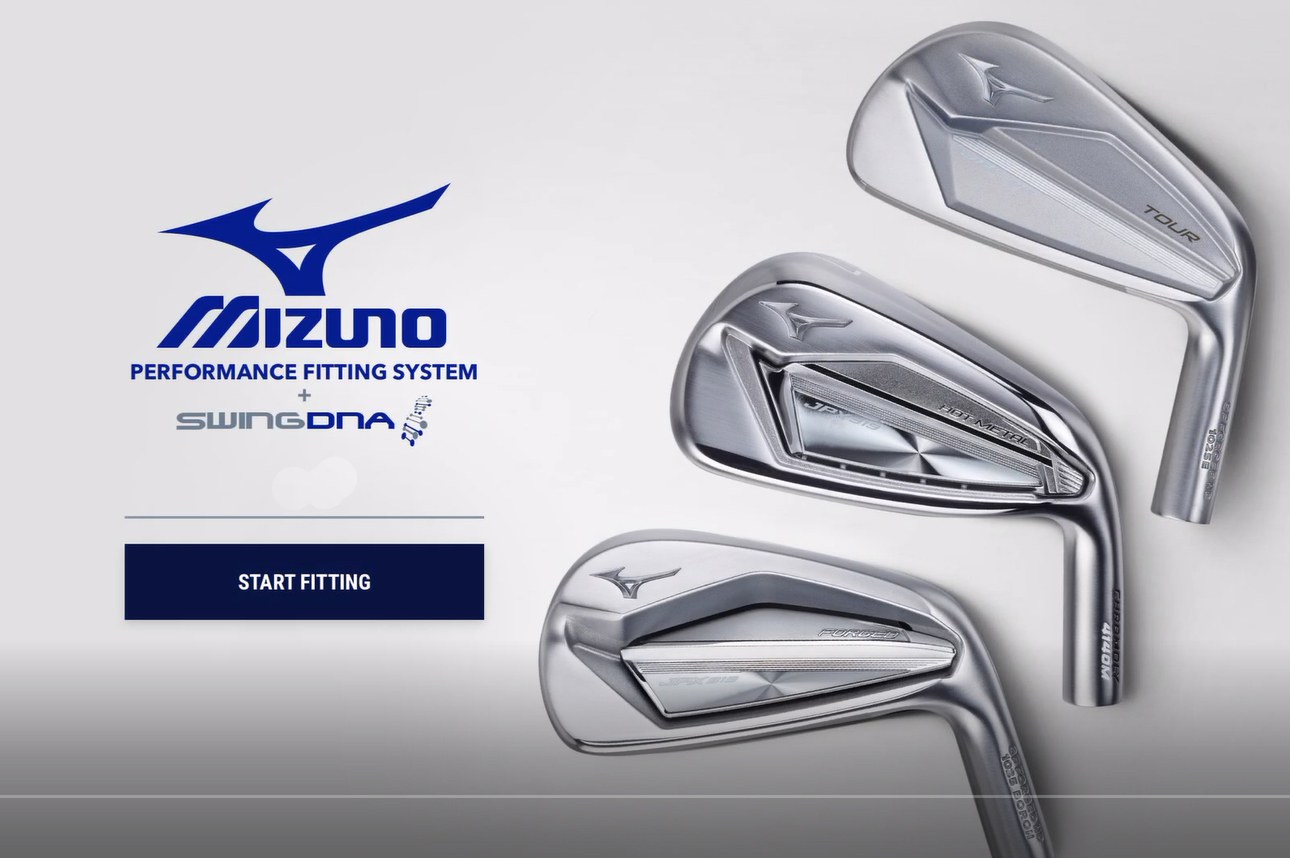 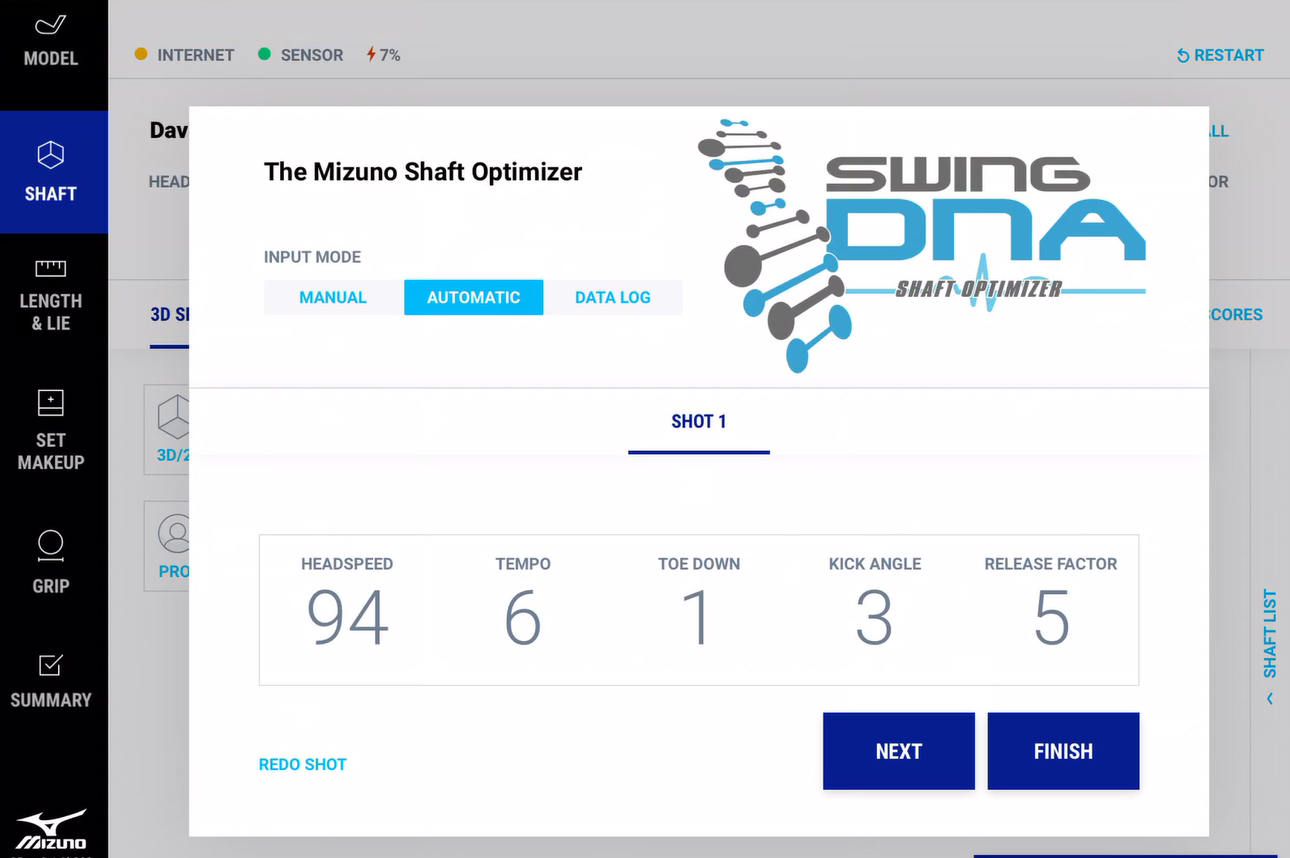 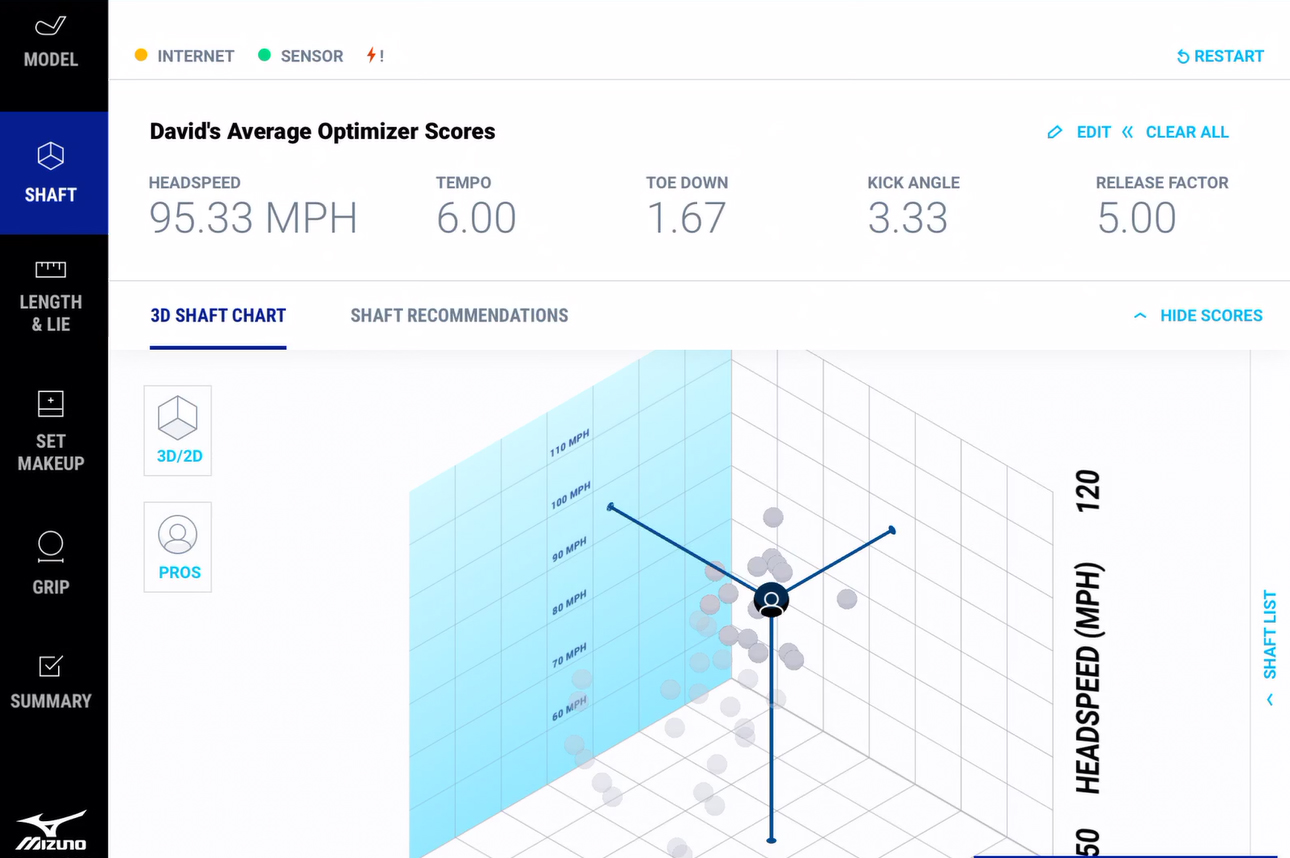 An average of 3 swings is mapped / profiled against #teammizuno players for comparison. There is no such thing as good OR bad Swing DNA. 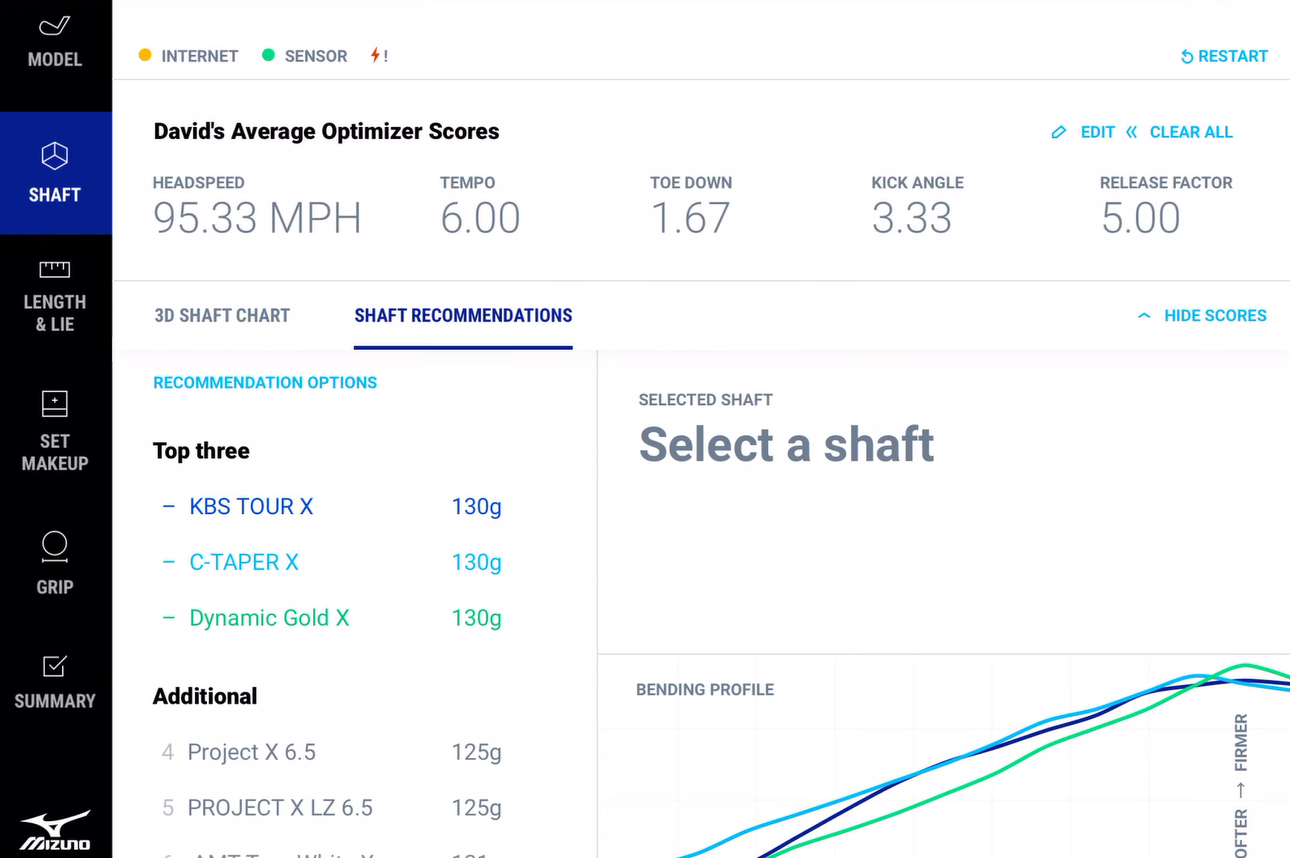 The swing is mapped against Mizuno’s database of custom shafts – all independently measured by Mizuno for fair comparison. The closest 3 matched shafts are selected for testing. Every shaft is ranked – to demonstrate why a ‘favoured’ shaft might be non optimal.

Establishing the correct lie angle is one of the hardest elements of iron fitting because of false strike board readings.  Most golfers find it uncomfortable to make their normal swing and strike through the board, while players who swing across the line get false readings caused by too much face rotation as the clubface is not square to swing path. By embedding a Gyro within our Shaft Optimizer, we’re able to overcome both issues. 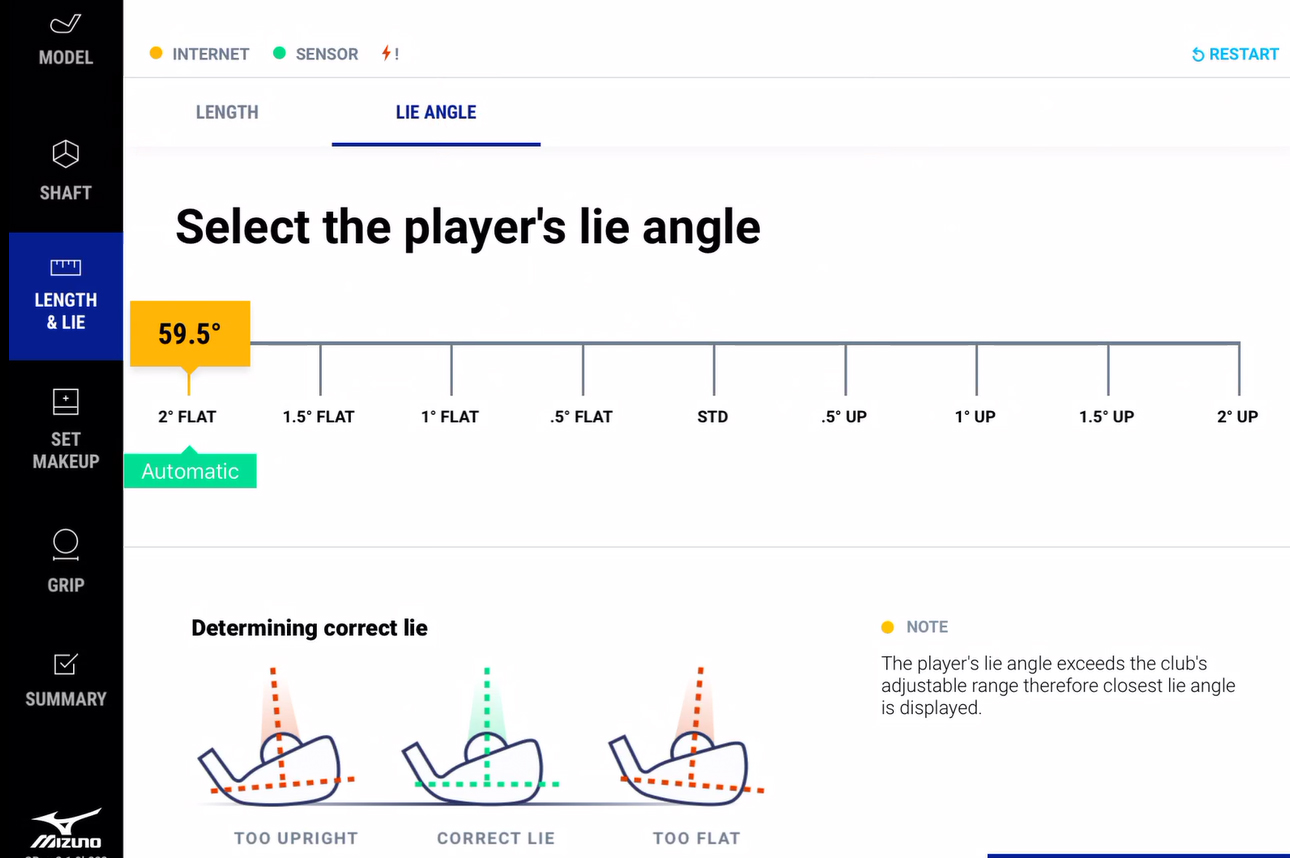 In today’s launch monitor era, Mizuno sees the optimum club-fitting scenario as the Shaft Optimizer 3D in conjunction with a launch monitor.

Look at the Optimizer as a recommendation – a shortcut to taking 50 possible shaft options down to just three. The launch monitor can then measure the real world results of those three shafts. Without the Shaft Optimizer, the fitter is just guessing which shafts to test, so if the correct one is lined up 12th, you won’t have the energy left to find out. 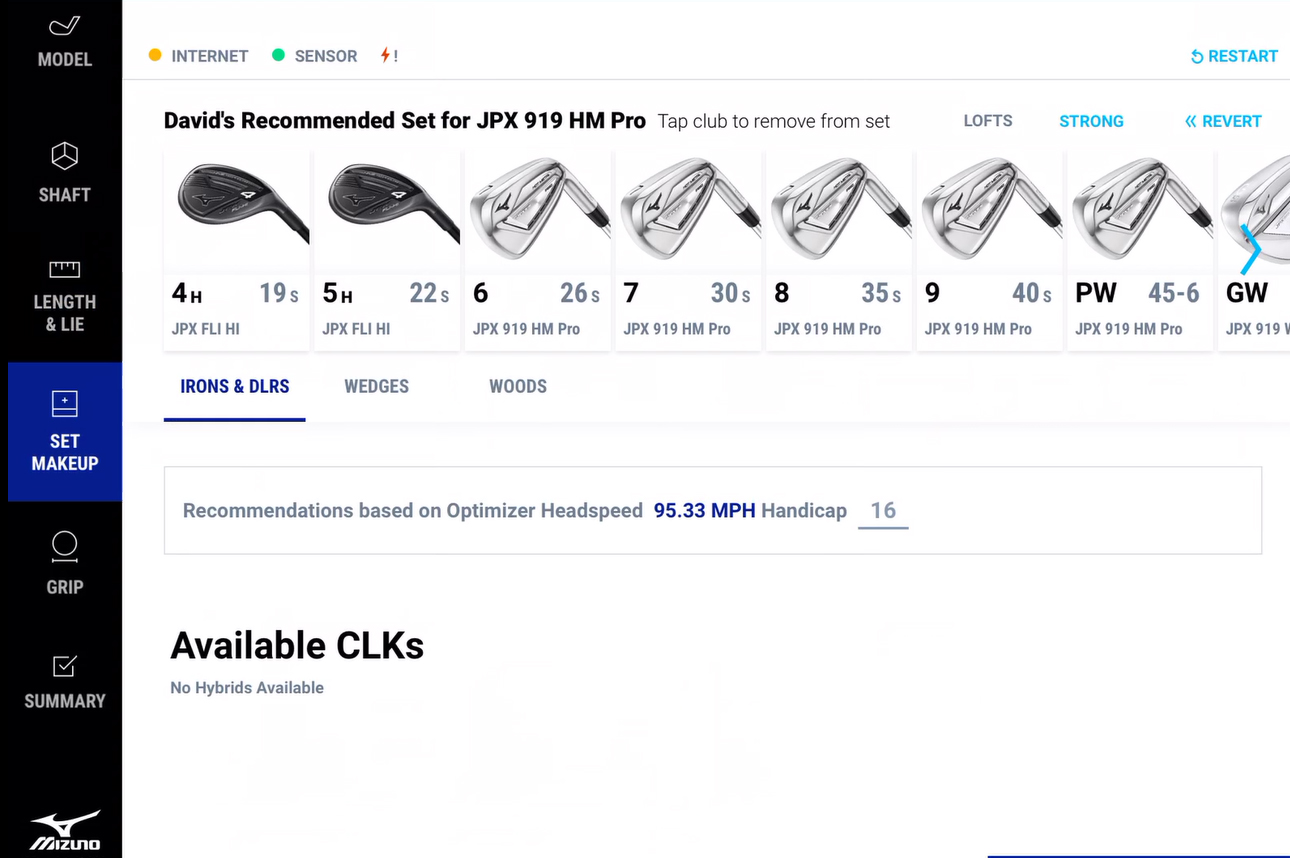 The DNA software recommends a set make up – with long irons or hybrids. 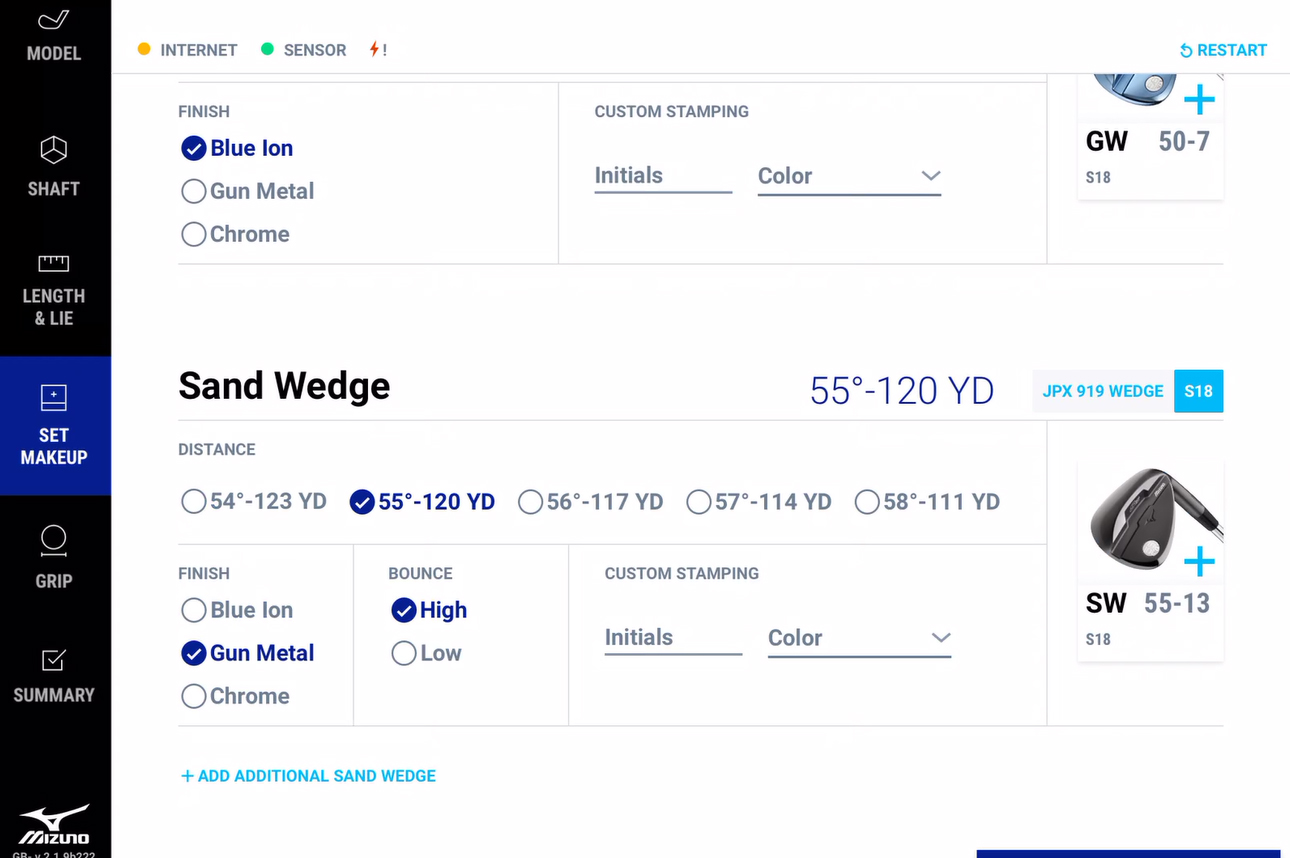 Wedges prescribed based on the loft of the pitching wedge – and expected loft gaps. 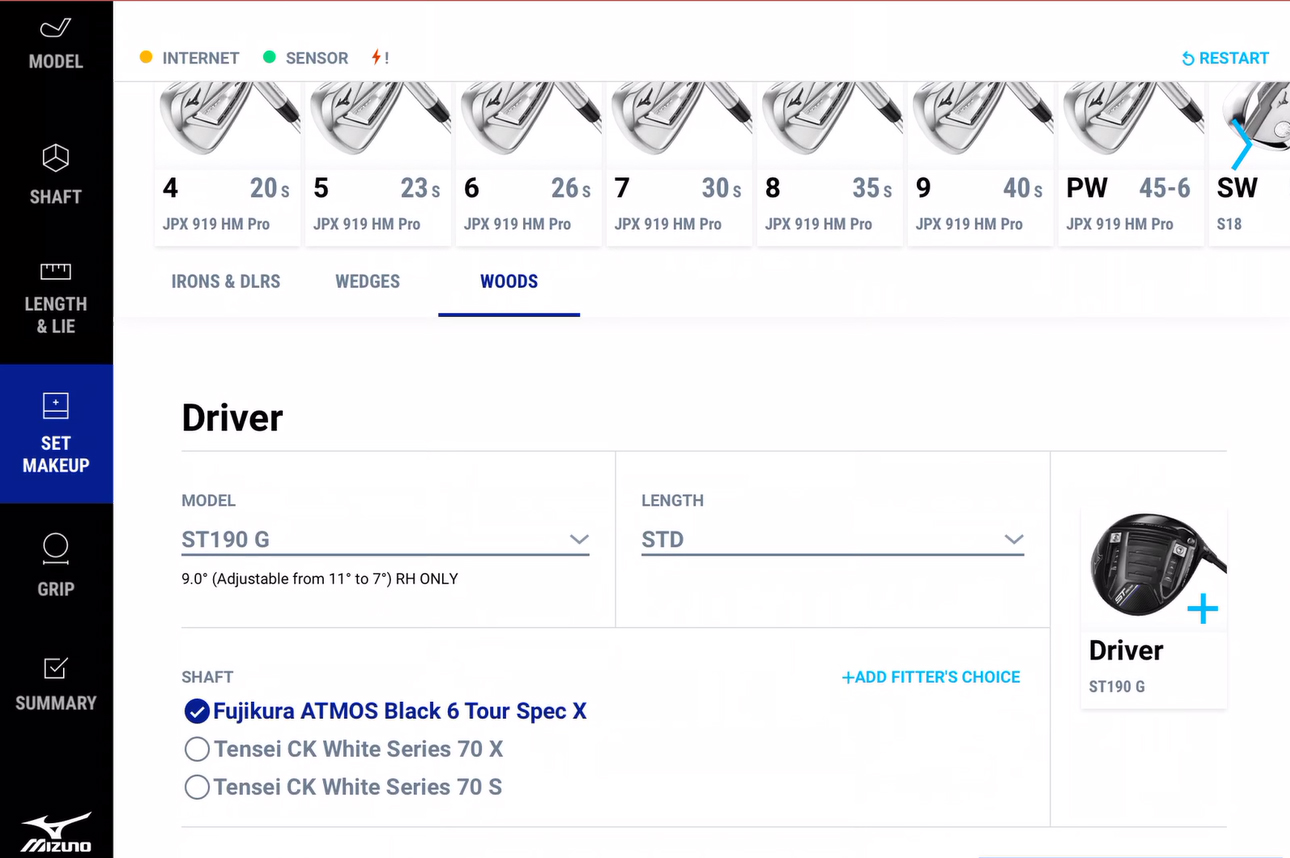 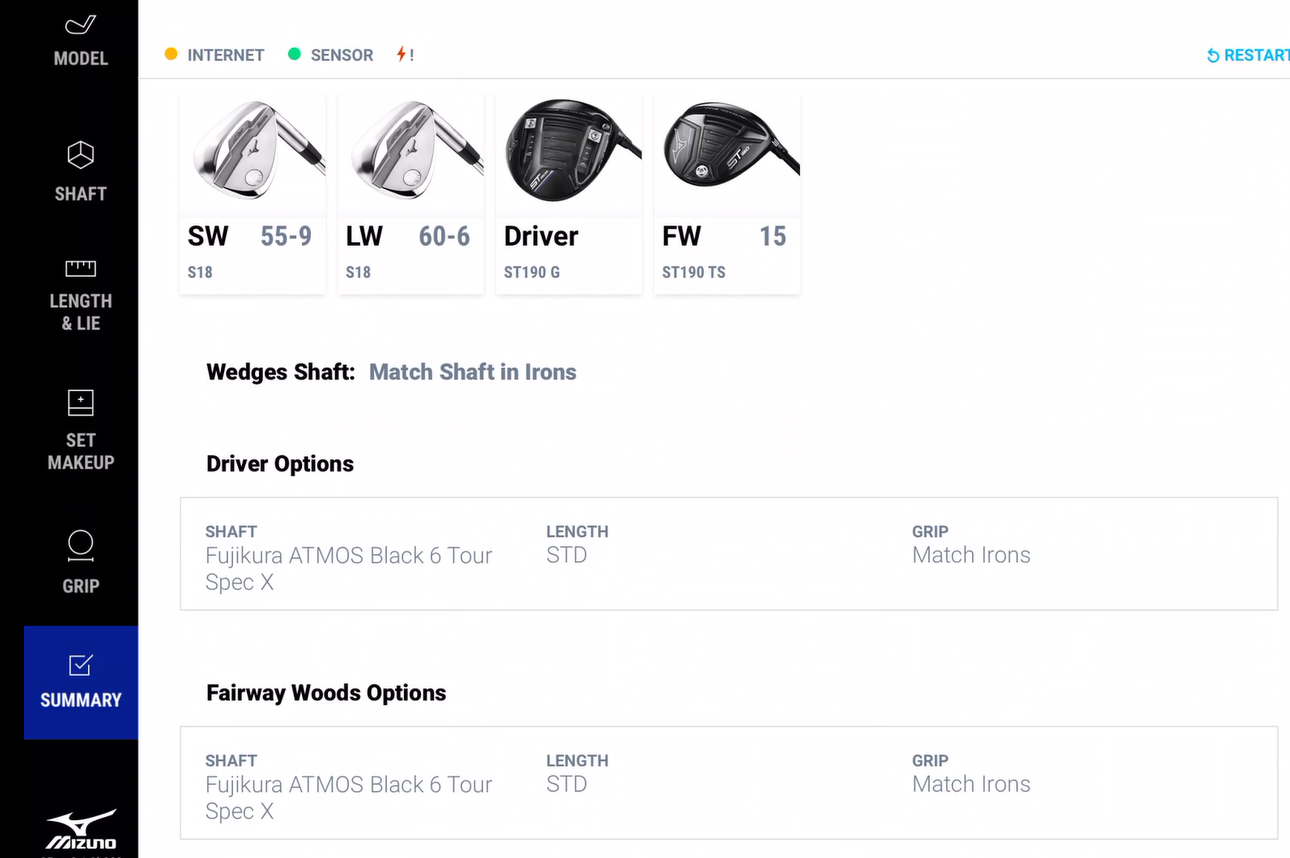 Fairways woods also prescribed through the software and DNA profile. 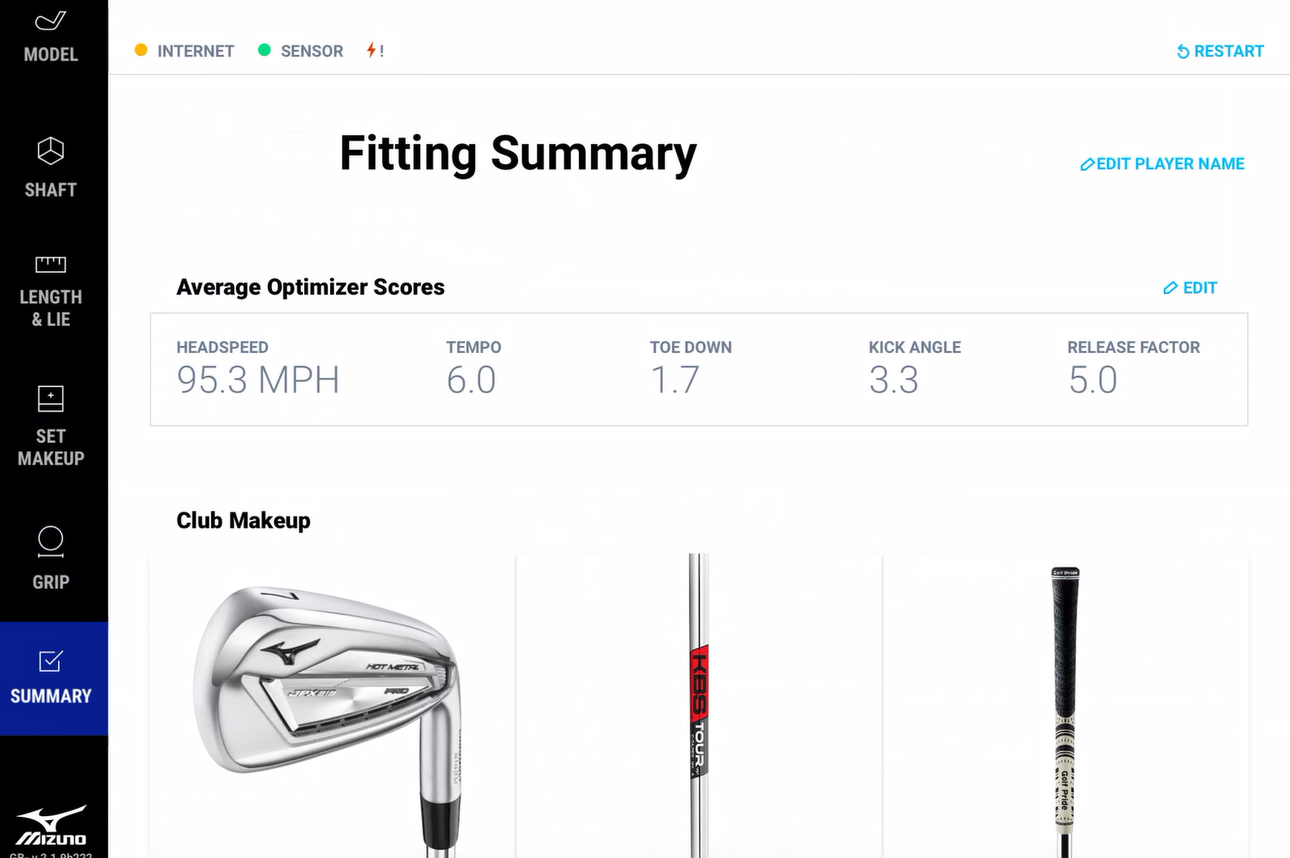 The software produces a Fitting Summary for your custom order. Mizuno typically takes 5-7 working days from order to dispatch of your custom equipment. 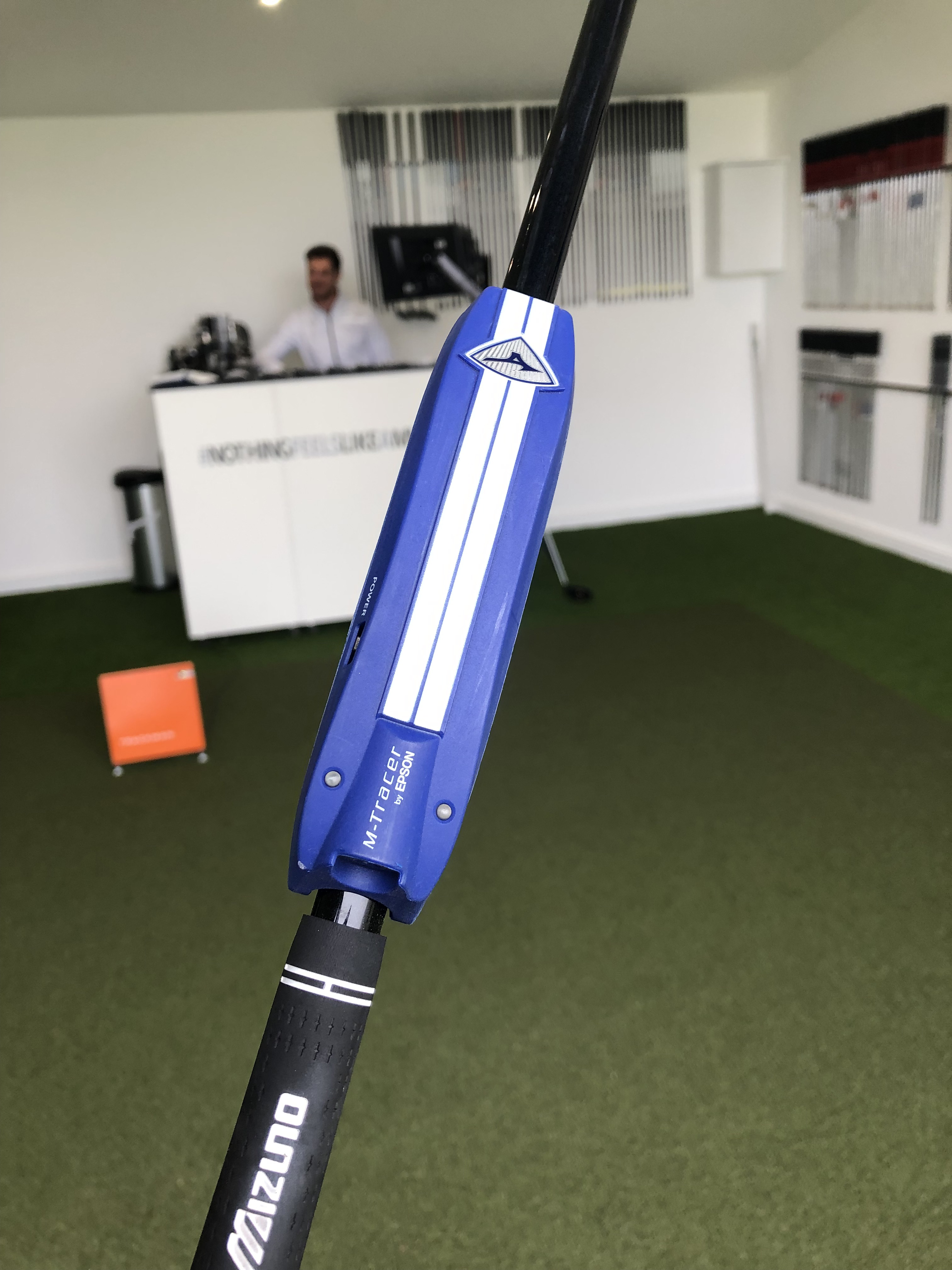 The new Optimizer in action at Mizuno’s Tour Performance Studio.

The new Shaft Optimizer 3D is available for testing at Mizuno Swing DNA centres across Europe. Measuring your Swing DNA will take just 10 minutes – a full iron fitting with testing is normally 30 minutes or more.