Below our are simplest weight settings for the new ST190G Driver.   There are other combinations to test with your fitter – but these would make a great starting point.

Please use the tool provided and be careful not to overtighten the screw.

FADE BIAS:  To encourage a fade bias ball flight, or counter a draw / tendency – move both weights into the toe slot.  Again these can be pushed close to the face for lower spin, or back for more spin.

DRAW BIAS:  A draw bias can be built by moving both weights to the heel side.  Push close to the face for lower spin, or back for more spin.

Using the same key, you can also adjust the neck of the ST190G – giving a range of lofts from 7.25 upto 11.75 degrees. As you deloft, the face will open fractionally. 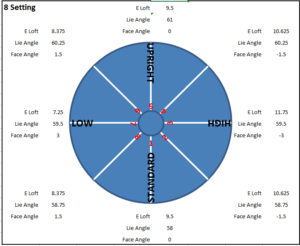 Check out more tips for fitting the ST190 G with Derek Murray at Foregolf.