As the new Mizuno JPX919 irons hit our fitting accounts in September – most players had 3 questions.  Am i a Hot Metal, Forged or Tour guy?  Will the JPX919 Tour be as good as the JPX900 Tour (winner of 3 majors) – will it get the same amount of play on tour?

With Eddie Pepperell (JPX919 Tour) winning the British Masters and an uncontracted player (JPX919 Tour / Forged mix) winning on the PGA Tour (Safeway Open) – the tour question answered itself.  Will the new world #1 switch up – that’s a question left to be answered.

Though most of the other questions have been answered by the game’s new network of vloggers and You Tubers – PGA Professionals and fitters who have become one of the barometers of opinion within the game.  So let’s flip the conversation.  Of all the You Tubers – who do you enjoy and trust the most?  >>VOTE 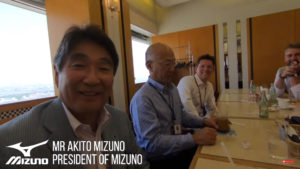 Alex Etches at Golf Box was lucky enough to visit the forging plant in Hiroshima – and somehow managed to meet Mr Mizuno himself – Akito Mizuno. Fast forward to 2.02!

You Tuber’s biggest equipment tester Rick Shiels was a big fan of the JPX919 Tour……..and all the others.

The original YouTuber Mark Crossfield put the JPX919 Forged up against our JPX919 Tour – in a sequence of on course videos (you can find the rest on his channel).

TXG – an upmarket fitting studio in Canada have a more hi-brow discussion style. A great informed addition to the mix.

The biggest custom fitting facility in Ireland Derek Murray at Foregolf had his own take on the JPX919 Hot Metal.

Then a bundle of testers worth a mention – the very fast growing and entertaining style of James Robinson, the considered views of fitter Michael Newton and the infinite detail of AskGolfNut Jay Smith.  You have a favourite – tell us on the Mizuno Forum.